​As mentioned on the home page, my name is Maria Elena Hernandez. Most people call me Malena. I'm a lifelong learner and often joke I have the student loans to prove it.

​However, early in my career, my formal academic record only included an associate's degree. I couldn't get a promotion at work, because I didn't have a bachelor's degree. My supervisor advised me to get one.

"It could be in culinary arts. It doesn't matter. Just get one." ​ 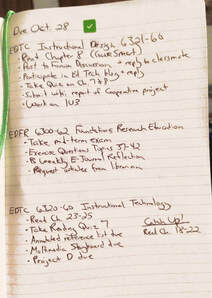 Old Ed Tech Class To-Do List
​Since I had a full-time job, I opted for the University of Texas at Brownsville Bachelor of Applied Arts and Sciences degree in Interdisciplinary Studies. That included courses in technology education training, and that was my introduction to educational technology.

​I enjoyed the classes. It overlapped naturally with my work experience. I was an instructional television director and received a grant to bring the PBS Ready to Learn program to the Rio Grande Valley. The program taught parents how  to use educational television as part of a view-read-do learning cycle. Free books were distributed for this, and the Ready To Learn coordinator conducted workshops to teach the process.

​After a meeting with a school district parental involvement director, the Ready to Learn coordinator said, "It was intimidating. I'm talking to her about my little activities, and I see her master's degree in education behind her on the wall."

When she said that, I thought to myself, "I should get one of those later."

Most people wouldn't consider my work in media outlets as educational or instructional, but I saw the similarities. There is a target audience and I'm trying to educate or inform them of something. I used print, websites, graphics, and videos to do that.  Richard Mayer's guidelines for multimedia learning echoed existing practices for good video production. And Steve Krug's "Don't Make Me Think," which I read when getting a master's degree in internet marketing, addresses usability issues that apply to all websites, including instructional ones.

​I applied for the educational technology master's degree program, as I was finishing my bachelor's degree. But life happened, as it does, and I couldn't even complete the first semester. 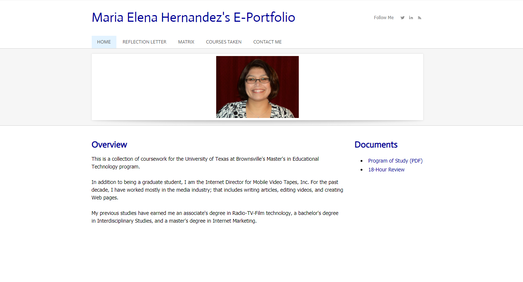 My E-Portfolio circa 2008
​And since I dropped out of the program a few weeks after my first semester started in 2008, I’m not sure how I have projects from the master's program on this website. But I do. When I reactivated this website in January 2021, I knew I had the old E-Portfolio shell, but I was surprised to see actual work. If you're curious, I moved those to the Earlier Projects page. 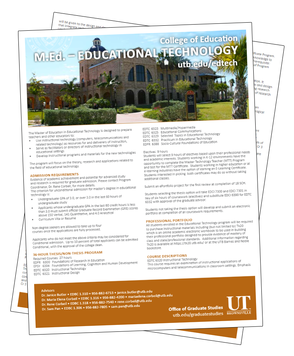 While I detoured to a different program for what is now my first master's degree, the UTB educational technology program would pop up again in my mind. My Evernote account shows I even saved the program flyer when I archived documents in 2012.

Fast forward to the fall of 2020, when I am helping my parish move its religious courses online due to COVID-19 precautions. On the technical side, I'm very comfortable with my skills. I can write, record and edit video, post to websites, track online submissions, create quizzes, and such. However, I didn't know if the content I'm presenting is effective for learning.

Around this same time, I wrote a story about an award the UTRGV Educational Technology program received. And, while I'm searching for employment listings for job-seeking relatives, I saw an opening for an instructional designer, who has media production and HTML experience. The stars seemed aligned, and I took a dive, applying for the job and to the UTRGV master's degree program.
​

​In January of this year, I started the UTRGV educational technology master's program. A few days later, I started my new job. I first enrolled in the classes needed to earn the Online Instructional Designer graduate certificate, since I thought those would benefit me the quickest at work. They did. They also helped me prepare trainings related to the volunteer work I did with the parish's online classes. The instructional units for EDTC 6321 and 6323 were developed to help volunteer teachers learn how to embed Google Slides presentation themselves to a class page, if they needed.

The evaluations conducted in EDTC 6321 were eye-opening. Previous informal trainings I had done were in-person and informal. I could easily provide answers to parts of a training I forgot to cover. But in the instructional unit planned and created, seeing people overlook buttons on a screen, which I think are big and obvious, was (maddening and) important to recognize.

The self-directed learning in EDTC 6341 gave me the opportunity to brush up my HTML and CSS skills. The timing for that Udemy training was incredible. It matched my job skills needs. A webpage issue I was asked to fix was something I had literally learned the day before as part of EDTC 6341. A coworker complimented me, making it sound like it was something I always knew.

I was very fortunate in the group I was in as part of EDTC 6320. Honestly, aside from one other student, it was the first time I communicated regularly with classmates. We still reach out to one another for help. One group member who was in her first module said she appreciated connecting with classmates who were further along in the degree plan, so she could see some of the tools we were already using. (And I appreciated they followed my suggestion to avoid cramming every bit of information into their video segments.) 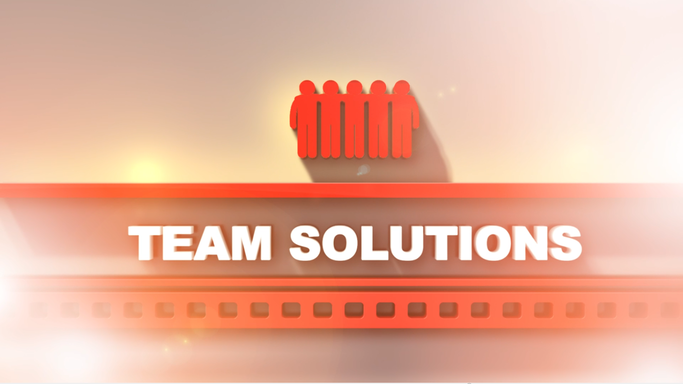 EDTC 6320 Cooperative Group Logo
​The EDTC 6320 group project also helped me decide the subject of the E-Learning Module for EDTC 6325. When the group project was done, my group members asked me how I edited the video. I did a very sloppy, impromptu job and didn't have the materials I used for in-person trainings I had done before. To stop that from happening again and to help others at work interested in learning Adobe Premiere Pro, I made that the subject of the EDTC 6325 project.

​Fortunately, that project was created in the Canvas learning management system. Since I use that program at my job, I was already familiar with it. Another plus, I was able to export my project as a Canvas course and import it into my work Canvas account to share with coworkers. (If you do that, note video closed caption files aren't included in the transfer.) 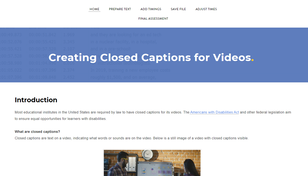 The EDTC 6332 project also let me formalize another training often requested at the spur of the moment (which then tends to only confuse the learner). The instructional unit taught learners how to create a closed captions file for a video. Too many people rely on automatically generated closed captions, in spite of accessibility leaders discouraging it. It is hard to find explanations on how to create a closed captions file, so I hope this lesson will be a resource to others.  The evaluation of this instructional unit also gave me an opportunity to talk to my coworkers about what I've been learning in the master's program and showcase what I can create.

​Not to downplay the importance of theories and research, but some of the most important lessons carried from the master's program to my job as an instructional designer have been very simple.

One of those is explaining to the learner why. Why do they need to learn this? Why do they need this action? Why was this answer wrong? The importance of answering that question was covered in the Ruth Colvin Clark and Richard E. Mayer's book "E-Learning and the Science of Instruction."

When writing news articles or video reports, explaining why the target audience should care was one of my top priorities. It should be a priority in instructional design also. I've probably edited more than 50 instructional videos this year. But the one I'm most proud didn't involve fancy graphics or effects. It was the video where I was allowed to rewrite the first two sentences of the script. It changed from "Student, you have to do X" to "Student, this is something new and this is why it's important to you," which I think is much more effective.

And in a formative assessment I made, I patted myself on the back for the feedback I added. Instead of just marking an answer wrong, I added an explanation about why it was wrong. These are seemingly small tasks and changes, but they can make a significant impact on the learner.

As for other advice and lessons learned from the master's program:

But endings also mean new beginnings. With experience now as an officially titled instructional designer and the completion of a master's degree in educational technology, a new opportunity is on the horizon.

Meanwhile, I have a long reading list waiting for me. I usually set up Google Alerts, sign up for newsletters, and adjust my social media feeds to follow the latest industry news for my current job. While I did that in January, because of graduate school, I haven't had a chance to pay much attention to them. That list is piling up.

Also, while conducting research for course projects, I found conferences and free trainings available. I would l like to explore those opportunities.

My family jokes about me signing up for a doctoral program next. While I am a lifelong student, I can assure them that won't be the case. The research class I took as part of the educational technology master's program was a stark reminder that I like reading research, but I have no interest in conducting it.

So this is the end of the tale of the educational technology graduate student who started classes in 2008 and finished them in 2021. 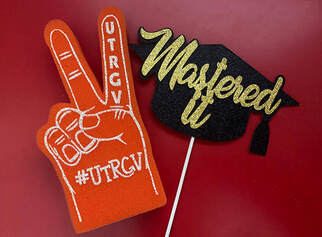